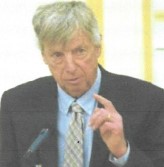 Richard Rudolph, Ph.D., Chairman, Rail Users' Network is slated as a guest speaker for Toledo Train Day. Richard has a lifelong interest in passenger rail issues, but it wasn't until he retired in 1996 as an academic dean at the University of Massachusetts, Boston that he has been able to focus his attention on this work. He was a founding member of Amtrak's Customer Advisory Committee at the national level serving as Vice-Chair and Chair, 1997-2001, and currently serves on the board of directors of the Maine Rail Group, a non-profit organization working to enhance and expand passenger rail in Central Maine. He also serves on the board of directors of PTSI Transportation and is a Senior Advisor for Railway Customer Service.

With a Ph.D. in history and retired from the academy, he is a pro-bono consultant on issues as wide ranging as sustainable development, community food security issues, farm to school initiatives, green energy, public power, customer-focused rail passenger service, and global environmental concerns. He has published numerous articles on these various issues and co-authored Power Struggle: The Hundred Year War Over Electricity published by Harper & Row. Now retired, he is currently focusing more of his time on energy, community food security and passenger rail issues. He writes a column for Passenger Train Journal and is the producer / host of a half-hour public affairs program "Community Voices for Change" at WMPG, University of Southern Maine's community radio station. Richard earned his BA., M.A. and Ph.D. in history from the University of Connecticut.